When we try to think about the recent developments done in the field of A.I during the past ten years. One would think and he won’t be wrong to conclude that we are indeed moving toward real Artificially Intelligent entities. Take a look at ASUS’s Zenbo or Pepper, these smart humanoid robots are able to do a lot of amazing things that people 20 years back would simply admire with awe. This just one example proves that we are indeed moving toward the intelligent era of things or we are at least in the prelude of it. However, we are still to see AI applications move toward human-like intelligence with rational and non-rational behaviors and thinking. What if our current development approaches toward A.I won’t lead us any far than smart things that stay behind the meta-cognitive state of intelligence? Are we implementing the right AI development concept? One of our main pillar of research at the J.C.P Laboratory has been to develop a technology that adopt a different approach towards the conception of A.I entities. We call this is the Baby-Step Model approach.

We first presented the Baby-Step approach during the developer’s conference 2017. Our session on ISSL has been very enriching and provided us with many ideas. As pointed out, the Baby-Step Approach and the technology implementing it is still under development and is due to evolve and change as implementation begin and real life challenges arise.

There are currently two phases in what we call the Baby-Step Model; Brain Programming and Meta-Cognition. We believe that this line of thought is the best when targeting Artificial Intelligent applications.

We humans, are hardwired to act in a certain way. Our behaviors are shaped and subconsciously modeled by our environment, cultures and from our interaction with other humans. Let’s call this “concept” or “fact” as Brain Programming; which is; our subconscious behaviors that are in a certain way programmed into our brains. These patterns are there in our minds, they are the results of our brain adapting to it’s environment.

Applying this concept to A.I applications will mean that these Artificially Intelligent entities should be able to self-adapt and adopt their behaviors from cues taken from the environment they are subjected to. To put this more clearly, let’s say an AI entity is a new born baby. A baby will try to learn and imitate the environment he’s subjected to without any prior knowledge about how to walk, talk, experience and react to feelings and emotions. An A.I entity in this state would thus know nothing about its environment and about how to interact with it. Like a new born, the A.I would only learn how to respond to a certain word and how to react to actions just like a human would. Thus, the entity shapes it behaviors base on humans’ behavior not on pre-programmed acumen or set of actions.

The images below demonstrates the learning stages of the baby-step model using the Intelligent System Scripting Language. 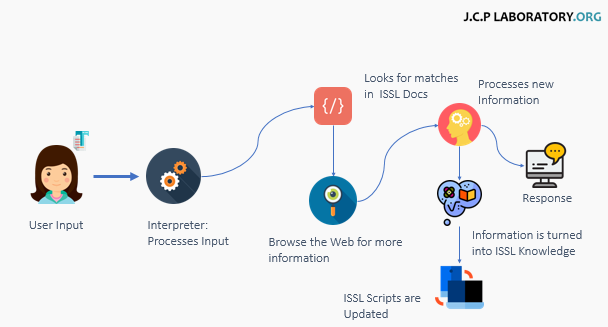 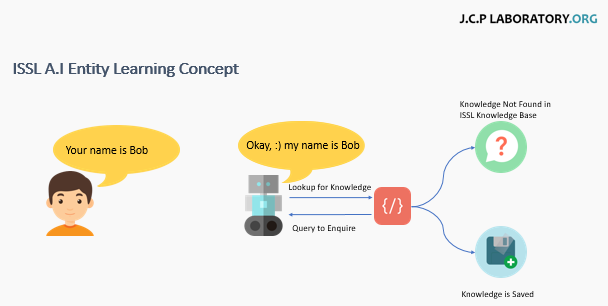 To round up: The first stage in the Baby-Step Model ensures that human behavior and reaction are imprinted to A.I entities.

Awareness is the realization of our own thoughts and the facts currently put forth before us. This meta-cognitive ability helps humans to maintain both rational and non-ration decisions and behaviors. The conception of the an Artificially Intelligence entity depends on the degree (it) is able to perceive the extents and limits of its knowledge. Once, meta-cognition is achieved, an entity (when thought as an individual) will be more capable to cater for and look for more knowledge on its own. To illustrate, imagine a student  researching about aerodynamics. At a certain point, she will eventually look out for learning materials that will broaden her knowledge about the subject. The logic of learning wants that the new knowledge is then considered as acquired and is referenced to as and when required. The same flow of logic thus applies to Artificially Intelligent entities. Knowledge and behaviors should be kept and referenced when needed. When the A.I is met with an unknown object or subject, learning process is to be automated and newly acquired knowledge is save as acumen for future references.

Images below demonstrate how A.I learns.

To round up: Second stage of the Baby-Step model ensures that A.I entities know the extents of its knowledge and that it is able to look for more on its own.

On the 16th April 2016, was held the biggest worldwide Azure conference called the Global Azure Bootcamp (GAB). It was organised in Mauritius by the Microsoft Student Partners (MSP), a community of students passionate about technology how wants to stand out and help shape the I.T world of tomorrow
Those into web development would agree with me that having a local web server set up on your own computer is very useful and essential. Especially if you are using a scripting language  such a PHP, then you’ll definitely need a local  server with the PHP interpreter installed. Secondly,
The developer’s Conference claims to be the biggest I.T event in Mauritius with quite rightness. It was a three days event that took place at Voila Hotel, Bagatelle, Moka – Mauritius. The event regrouped tech experts, students and as well as enthusiasts. It was with great pleasure that I